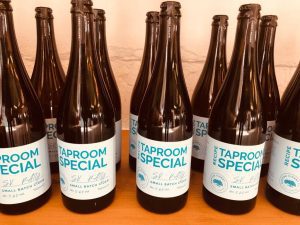 The day has been a long time coming for the owners of Napton Cidery, whose grand opening plans were cancelled due to the first Covid-19 lockdown.

During the lockdown Jolyon and Charlotte Olivier lost more than £100,000 in revenue after being forced to cancel various events, workshops and tasting tours, leaving online sales as their only source of revenue.

But, due to the success of a crowdfunding campaign that the owners launched earlier this year – to help the post-pandemic recovery of their business – has exceeded expectations and the couple’s plans for expansion are back on track.

Along with the sale of their celebrated ciders and new products that the team has been working on, the taproom and shop also stocks perry, juices, spirits, vinegars and apple cider brandy; canned ciders and branded collectors’ glasses are also available to buy.

Commening on the delays and setbacks the company has faced, co-owner Jolyon said: “The taproom was closed before it even opened. Our licence was issued on the Monday immediately after the Government shut the pubs in March. We had been planning a big launch to celebrate. We also had six pubs lined up ready to install our kegs, all of which had to close as well.

“So, we thought it appropriate to celebrate finally being able to open with a limited edition cider that we’ve called The Taproom Special, it’s a single-variety cider made from the Katy apple.” 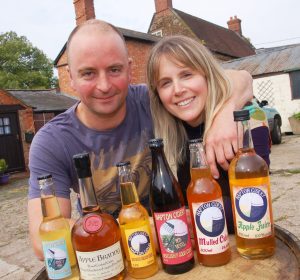 The new cider is a strictly limited edition batch with just 1,200 bottles available, which can only be purchased by those visiting the new taproom.

Napton Cidery, which will be celebrating its 10th anniversary in 2022, is committed to being a sustainable company – a philosophy that underpins everything they do, from harvesting through to the use of recycled packaging.

All of their apples come from traditional organic and biodiverse growers, and the cider is naturally fermented using only wild yeasts, with all ingredients sourced as locally as possible.

Today, the team harvests, presses, bottles and distributes more than 90,000 litres of craft cider a year, using 17 types of apples from six orchards across the Herefordshire region.

The Cidery is open Monday-Saturday 10am-5pm and Sunday 12-5pm.