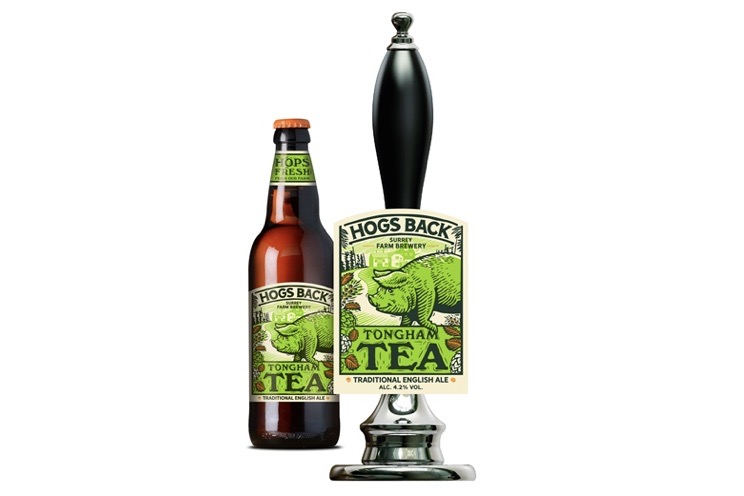 Hogs Back brewery is kick-starting celebrations for its 30th anniversary in style, by putting its home village in Surrey firmly on the map with the rebrand of its flagship ale as Tongham TEA.

The new name and accompanying stylish visual update for TEA, or Traditional English Ale, reflects Hogs Back’s place at the heart of the community in Tongham and more widely across Surrey. For the first time, the ‘Farm Brewery’ appellation is also included on bottle labels and pump clips.

The new Tongham TEA branding will appear on 500ml bottles, as well as on the new pump clip, glasses and other marketing support in the on-trade. It has a traditional, graphic style, with an illustration of the familiar hog mascot in front of the brewery, farm buildings and fields.

Hogs Back’s managing director, Rupert Thompson, said: “TEA was the first beer brewed by Hogs Back when the brewery opened in 1992 and was originally called Tongham TEA. Returning to this name reflects the strong affection that beer drinkers in our Surrey heartland have for both the beer and the brewery.

“The new TEA design is the deliberate antithesis of the abstract names and designs that currently characterise the craft brewing sector, but TEA is just as much a crafted beer. TEA is a local, natural, fresh beer, proudly from a specific location – everything a traditional English ale should be. The design communicates that simply, emphasising what’s unique about Tongham TEA and now with its own distinctly authentic and individual style.”

TEA has become even more rooted in its locality in recent years. Hogs Back now grows the Fuggles hops that give the beer its distinctive flavour and aroma in its own hop garden next to the brewery, highlighted on the neck collar, which the new fresh green colour reflects.

Tongham TEA is a full-bodied, well-balanced bitter, brewed in small batches using English malt carefully balanced with Fuggles hops. It is gently fermented to leave some of the natural malt sugars, giving a full and satisfying flavour with a long, dry finish, and we look forward to reviewing TEA as soon as we can.